Congratulations to all the young people who took part in the BBC Voices Animation sessions I’ve been running this week in the Forum, Norwich. It’s been part of the BBC Norfolk Children and Young People’s Film Festival, delivered on behalf of UniQpictures.

Over the three days participants had the opportunity to have a go at both 2D and model stop motion animation. We had some terrific short films made in the two hour sessions (10-20 seconds!) based on mixing up characters from their favourite movies. 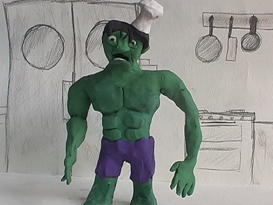 The image above is a still from Banners Bistro, (combining characters from Hulk and Ratatouille) a film made in one of the workshops. The model was made by talented young film maker, George Moore, whose Tim Burton-esque animation Clockwork Circus has been attracting a lot of positive attention.

All the films will be shown on the Chapelfield “Big Screen” soon!