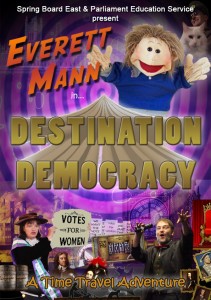 I’m back on tour with Spring Board East theatre in education company for the second half of the autumn term performing to primary schools in East Anglia. Destination Democracy tells the time travelling adventures of Dr Hugo Hourglass and his apathetic puppet companion Everett as they lurch through one thousand years of the power-struggles of parliament and democracy in England.

The Horrible histories inspired show uses projected animation and graphics to compliment the multiple wigs, hats and props used in the portrayal of Kings, politicians and conspirators throughout the ages.

Aimed at year 6 pupils, the performance is accompanied by two interactive workshops focusing on the power of protest and petition. The first highlights the suffragette movement and women’s struggle for the vote in the early 20th Century. The second deals with the harsh realities of child labour in the Victorian period and the introduction of the 10 hours act to limit the length of time children could be made to work.